IN SHAANXI PROVINCE, NOODLES ARE A BIG DEAL 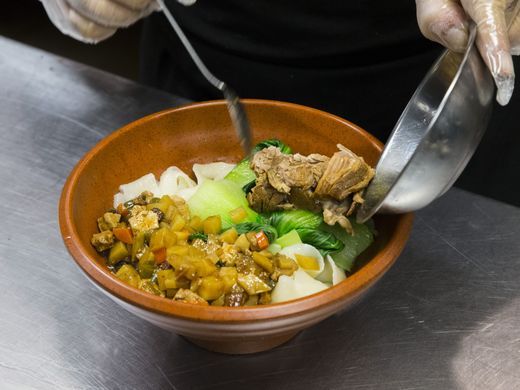 Like many Chinese immigrants who are fueling the boom in the Valley’s Chinese restaurant scene, Huang, Xiao and Cheng were international students at Arizona State University and settled here after graduating.

In 2015, Huang purchased House of Egg Roll, a forgettable, decaying Americanized Cantonese takeout joint in Chandler, and completely remade the menu with the dishes of his native province.

“When you say ‘biáng,’ people will know you’re talking about Shaanxi. There is culture behind this word.”Pingping Xiao

To say the revamped House of Egg Roll was well-received would be a gross understatement. Current and former Chinese students — including Xiao and Cheng — packed the tiny eatery and Time Out quickly named it one of the best Chinese restaurants in the country in January 2016.

Over the next year and a half, House of Egg Roll would go through multiple menu revisions and name changes, eventually settling into its current identity, a Chongqing-style noodle shop called Let’s Eat Noodles.

But Huang, Xiao and Cheng made plans for a new Shaanxi-style restaurant — one that would be far more ambitious than the first.

Stepping into Shaanxi Chinese Restaurant, diners are greeted by two replicas of Xi’an’s famous terracotta warriors, flanking a giant, glowing sign depicting the character for biáng, a symbol of Shaanxi culture and its most famous dish.

Like many complex Chinese characters, biáng can be broken down into smaller components that lend meaning to the whole: references to the Qin dynasty warriors, the myth of the horse king, Shaanxi’s agricultural roots, its artistic history and more are all pulled together into this single character, Huang says.